The typical places where wasps like to nest in our homes are wooded wall cavities and underneath the eaves of roofs.

If your home has a front porch of any kind, the chances are that it has the potential for attracting wasps to nest there.

Your initial reaction might be to call an exterminator and have them spray pesticides around your porch, but that might make the environment rather unhealthy for you and your family.

One traditional method of keeping wasps away from front porches is to paint the porch ceiling blue.

Several homeowners can testify to the fact that wasps have stopped nesting on their porches ever since they painted the ceilings blue.

There are various reasons why this might be the case.

Some people claim the blue color tricks the wasps into thinking the ceiling is a blue sky or blue water, so they want to stay away from it.

In any event, the color blue is effective at keeping wasps away.

The actual reasoning behind this has more to do with the colors which appear threatening to the wasps.

We will try to discuss them in detail in our article below. But let’s start with some basics first.

Wasps are flying insects that have the potential to sting humans if they feel threatened.

Many people confuse wasps with bees because they both have black and white colors to them.

You can tell the difference by looking at their bodies. Wasps have shinier and longer bodies, while bees are hairier and plumper.

The two most common types of wasps are hornets and yellowjackets.

In the United States, various species of hornets and yellowjackets are spread out all over the country.

You can also find bald-faced hornets in the south-eastern states of the country as well.

Scientists have not found any particular color to deter wasps directly.

However, wasps tend to avoid lighter colors simply because they cannot see them clearly.

There is always a chance that you could accidentally run into a wasp if you wore a white-colored shirt, but they won’t come charging after you.

Have you ever wondered why a beekeeper’s suit is white?

It is because insects, bees, and wasps do not notice white, so they won’t swarm all over it.

At the same time, a white-colored porch won’t do much to deter wasps away either.

If the wasps and bugs find their way to a porch with a white-colored ceiling, they will still build a nest there.

On the other hand, if you were to use a blue or green color on the porch ceiling, then it would do a better job of deterring wasps from nesting on your porch.

What Colors are Wasps Attracted To?

Wasps are very protective of their nests.

If they perceive anything to be a threat to them or their nests, they will attack the threat with their stingers.

Colors are generally how a wasp determines threats from non-threats.

Darker colors are more threatening to wasps. When they see darker colors, they tend to think of them as natural predators in the wild.

Some of their greatest natural enemies are skunks and wasps.

So, if you wear dark shirts or pants outside, then you might find yourself under attack from wasps.

Therefore, do not wear black or brown clothes outside.

And, of course, do not paint your house black or brown because then you would be inviting all kinds of trouble to your porch.

That is one of the reasons why wooden houses without paint tend to attract so many wasps, bugs, insects, and even many types of birds.

The natural brownness of the wood makes the wasps think you’re a tree in the forest.

Does Painting A Porch Ceiling Blue Keep Wasps Away?

As I mentioned before, BLUE paint applied to a porch ceiling will keep wasps away.

Not only wasps but you will find that it helps in stopping many birds from coming and nesting in the porch ceiling.

And this is something that has been known for a long time.

Many different theories about why blue paint deters wasps have been floating around over the years.

Do they think a blue porch ceiling is really the blue sky?

No one can get into the mind of a wasp. All that can be done is to understand the scientific reasoning behind why wasps avoid blue.

Perhaps it has more to do with the ingredients in the blue paint than the actual blue color itself.

An ingredient called “lye” was a popular ingredient used in milk paints back in the day.

Lye was commonly found in blue paint too. We now know lye to be a bug repellent.

In case you never heard of this ingredient before, it is a powerful alkaline solution found in most modern-day pesticides and cleansing solutions.

The aroma of fresh lye is powerful enough to deter wasps, bees, and mosquitoes away for a long time.

Unfortunately, after a couple of years, the lye scent becomes less powerful as the scent wears down.

Then it won’t have the ability to deter wasps anymore.

The simple solution to the problem was to repaint the porch ceiling with a fresh coat of blue.

That is what people used to do when the wasps would come back.

Why blue paint to keep wasps away?

A fresh coat of blue paint was like a powerful force that drove the wasps back away from people’s homes.

The tradition of blue paint has stayed alive for over 100 years, especially in the southern states.

A lot of southerners continue to use milk-based blue paint on the ceiling of their porches.

Many of them are not aware of the lye ingredient and its effect at deterring wasps.

They tend to think it has more to do with spiritual reasons.

Whether or not that is true is up for debate. No one can really say for sure.

So, what happens if you use a blue coat of paint without lye in it? Will it be ineffective at deterring wasps?

Not necessarily, because there are certain blue colors that are light enough for wasps to ignore.

But if you choose a darker blue, then it might not be as effective.

What Is the Best Blue Paint to Keep Wasps Away?

Painting a porch ceiling blue will keep wasps away, but you need to use a lighter color blue rather than a darker color blue.

In South Carolina and Georgia, it is a tradition for people to use a special type of blue color called “Haint Blue.” It is believed to be the best blue for keeping wasps away.

Haint Blue is basically a cross between blue and green shaded colors.

This color became popular in the 19th century after it was introduced by the descendants of slaves.

They believed that Haint Blue had the power to deter evil spirits because the color looked like a body of water to the spirits.

The legend is that evil spirits cannot cross water bodies, so they stayed away from blue.

Whenever there were wasps or mosquitoes around, it was supposedly a sign of evil spirits being present.

Since the Haint Blue color kept the wasps and mosquitoes away, the descendants figured it was keeping the evil spirits away too.

If you were to visit a city like Savannah in the south, take a look at the color of the window sills, frames, and porches of the older homes.

They’re most likely going to have a Haint Blue color because of this classic southern folklore.

Many generations of southern families who’ve lived in these homes continue to repaint them with Haint Blue in order to keep the tradition alive.

For the best results, choose a milk paint that is a Haint Blue color. Then you can satisfy the science and folklore reasonings at the same time.

But don’t just paint your porch ceilings in Haint Blue. Try going a step further by painting your window sills, siding, frames, and doors in Haint Blue as well.

Few Additional Ways to Keep Off Wasps and Bees

Remember to wear lighter colored clothes when you go outside.

Wasps do not see lighter colors like white, grey, or cream. And contrary to popular belief, red is not a good color to wear.

Some experts claim that wasps do not see the color red, so you would appear invisible to them if you wore red-colored clothes.

As you just learned, black colors are perceived to be threatening to wasps.

So, red colors will increase your chances of getting attacked by wasps because they see red colors as black colors.

Stick to white, tan, or grey clothing, and you should be fine.

There is a lot of misinformation out there about wasps and color.

Some people will say that lighter colors attract wasps, but it is actually the darker colors that attract them.

That doesn’t mean wasps will purposely avoid lighter colors, but they won’t feel compelled to go near them.

Think “Haint Blue” and “milk paint” for your porch ceilings and see what happens. Good luck.

How to Paint Stripes on Furniture – To Make It Look Unique 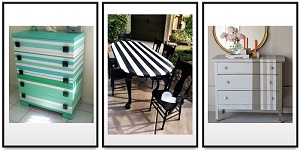 If you are looking to change up your home décor, but do not want to spend a great deal of Read more

How to Paint Over Powder Coated Aluminium Windows? 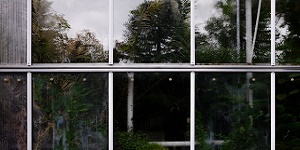 I still remember the first time I hold my paint brush. I was 21 then and my project was to Read more

Can You Spray Paint Your Artificial Lawn Grass Green?

At first the thought of spray painting your grass may seem out of the ordinary to say the least. However, Read more 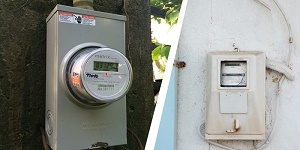 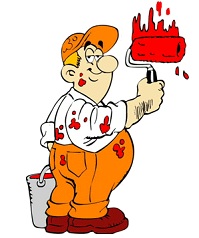